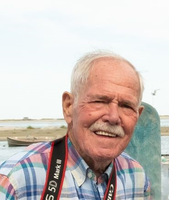 Charles (Charlie) Edward Monroe passed away peacefully in his sleep on February 12, 2021. Charlie, a long time resident of Sunnyside, Queens, was born on September 3, 1937 in Long Island City, Queens. Charlie, a very hard worker, held many jobs during his life, most in the food processing field. He worked at Sealtest-Breyers Ice Cream, Farm Fresh Dairy (Reddi Whip), S&K Farms, and, finally retiring from, Domino Sugar, where he was a manager for almost 20 years. Never one to sit idle, Charlie decided that the best way to enjoy his retirement was to go back to work, and he found great joy as a seasonal employee at the Bronx Zoo for 10 years. Charlie was also civic and politically minded and served his community in various ways, including as Men's Representative for the Young Democrats Association, President of the Anorac Democratic Club, on the Queens Democratic County Committee, and President of the 108th Precinct Police Community Council. He also enjoyed being an election poll worker for many years. Charlie's true legacy, however, was his love for his family. His greatest joy was spending time with his family and there is nothing that he wouldn't do for them. At various times throughout the years, Charlie spent his time helping his family by serving as the president of Queen of Angels Home and School Association (PTA), a Boy Scout leader, a baseball coach, a softball coach, a babysitter, and a best friend. His family cannot properly express how greatly they will miss him. Charlie is survived by his wife of 51 years, Joan; his son, Charles, Jr. and his wife, Nicole; his daughter, Barbara and her husband, John Glismann; his granddaughters, Brogan and Caroline; his sister; Alice Browne; his brother-in-law, Joseph LiCalsi; his nieces and nephews, Catherine Maguire and her husband, John Maguire, Sean Maguire, William Edwards, John Gale, Billy Gale, Christopher Browne, Margaret Rabago, Suzanne Glassman, and Laura Caruth; and great nieces and nephews. He is preceded in death by his parents; his brothers, John and Robert; his sisters, Mary, Frances, and Margaret Gale; his sisters-in-law Barbara Glassman LiCalsi, Dolores Flood, and Rosemary; and his brothers-in-law Francis Glassman, Richard Glassman, Kenneth Flood, and Jack Gale. Visitation will be held at Edward D. Lynch funeral home at 43-07 Queens Boulevard, Sunnyside, NY on February 20, 2021 from 8:30am to 10:15am followed by a funeral mass at 10:45am at Queen of Angels R.C. Church at 44-04 Skillman Avenue, Sunnyside, NY. Burial will be in Calvary Cemetery in Woodside, NY following the mass.