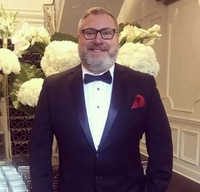 Queens, NY - Marcus A. DeCosta, 48, died Sunday, August 9, 2020, born in Lewiston, Maine July 1, 1972, was raised in Mechanic Falls, Maine. Graduated in 1990 from Hebron Academy in Maine, relocated to New York City, where he earned his bachelor's degree in philanthropy. He was employed for the past 20 years at the Trinity School in New York City, most recently as the Director of Development. Marcus embraced his love for Broadway at the Lewiston-Auburn Community Little Théâtre. This passion later gave way to an encyclopedic knowledge of not only theater, but also movies. Marcus' written critiques of a recent show or motion picture were known to be as insightful, if not more so, than those that hit the papers. Marcus was a die-hard Yankees fan and loved to have a steak at the club house. He also nurtured a love of rugby as a player on the Gotham Knights and as the founder and coach of Trinity's rugby team. Marcus was a force in the independent school fundraising world, raising millions to advance Trinity's mission. Having shared his expertise and knowledge with development professionals across the city and nation throughout his career, he was widely known and fiercely loved throughout the industry for his generosity, authenticity, and honesty. This generosity of spirit extended to his personal life as his huge heart opened to both lifelong friends and new acquaintances. Whether it was a night out on the town, Thanksgiving dinner, grabbing drinks, going to see a show or a movie, throwing his annual Oscar's party, or traveling, his infectious personality spread warmth and happiness. His wit, love, and laughter created treasured memories that family and friends will forever cherish. Marcus is survived by five siblings — Dana A. DeCosta and his wife, Debra, of Harwich, MA; Susan E. DeCosta Guiffrida and husband, Sam of Venice, FL; Peter A. DeCosta of Madeira Beach, FL; Todd A. DeCosta of Madeira Beach, FL; and Jennifer DeCosta Rabasco and husband, John, of Allentown, PA — as well as 9 nieces and nephews. He was predeceased by his parents Donald A. DeCosta and Priscilla Tracy Rand DeCosta and sister Cynthia E. DeCosta of Mechanic Falls, Maine. Family memorial will be private held at a later date. In honor of his memory, donations can be made to The Ali Forney Center for homeless LGBTQ youth. Checks may be mailed to The Ali Forney Center, 224 West 35th Street, 15th Floor, New York, NY 10001. Online donations may be made at https://aliforneycenter.donordrive.com/index.cfm?fuseaction=donate.event&eventID=1. Or the Marcus DeCosta Fund for LGBTQ & Inclusion & Support Fund at the Trinity School https://www.trinityschoolnyc.org/support-trinity/remembering-marcus-de-costa#donatenow