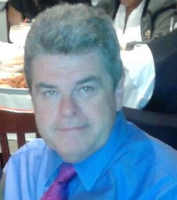 Peter Paul McGuire, Jr. was born on October 26, 1959 in Queens, NY. He was the only son and last born to the late Peter Paul McGuire, Sr. and Helen Margaret Kelly-McGuire. Peter grew up in Corona, Queens and attended Newtown High School. In his senior year, Peter was selected to be a part of the Newtown High School's Co-op program with Con Edison and was offered a full-time position after graduation. During his tenure at Con Ed, Peter was recognized for his stellar work ethic and excellent customer service. Peter was a proud member of Local 1-2 Utility Workers Union of America, and retired as a Senior Specialist after 39 years of loyal service. Peter made many life-long friends while working at Con Ed, and even formed a band with his pals called "Dave Green and the Old Brown Shoe". Con Ed is also where he met the love of his life, his beautiful wife Olivia. Peter would often say he fell in love with her from afar and was lucky the day he was assigned to sit next to her at work. They became fast friends and soon became two peas in a pod. Peter had a great sense of humor and hearty laugh. He was thought of fondly by many as a "great guy" who got along with everyone. Peter loved music from a young age and learned to play several instruments, but fell in love with the drums. Peter was a true renaissance man. He was a talented musician, culinary aficionado, tech geek, and budding photographer. A great lover of music, he and Olivia would go to many concerts including the Rolling Stones and Steely Dan. He often told stories of his days sneaking into the famous CBGBs when he was still in high school. Peter was a devoted husband, a proud stepfather to three daughters, and the doting grandfather to two grandsons. He was also an animal lover who took great care of his beloved dogs Buddy and Charlie, and "grand-dogs" Marley and Winnie. Peter enjoyed traveling, making lovingly-prepared meals for his family, attending Broadway shows and concerts, as well as simply exploring Manhattan with his wife, Olivia. Peter was also a big sports fan. He enjoyed attending the US Open, and was a diehard Dallas Cowboys and Mets fan till the end. Peter joins his beloved wife Olivia McGuire and parents Peter and Helen McGuire in heaven. His life will forever be cherished and remembered by his loving daughters Lalena Fernandez-Butler (Henry), Samantha Thomas (Jonathan), and Dana Bryant (Jason); his cherished grandsons Kevin Butler and Miles Butler; his beloved sisters the late Maureen McGuire, Ellen Saganek- Afanador (Carlos) (the late Joseph Martin Saganek Sr.), Maura Patalona (Ron), and the late Margaret DePrimo (John); his endeared brothers in-law Reginald Herd (Joanne), Michael Herd (Lisette), and Jeffrey Herd; his beloved nieces and nephews the late Joseph Martin Saganek Jr., Lynda Schulz-Markle (Stacy), Melissa Spillane (John), John Thomas DePrimo Jr., Matthew Patalona (Stephanie), Carlee Markle, Ty Markle, Dallas Herd (Dilan), Denise Herd, Austin Herd, Philip Herd (Jovanda), Meghan Herd, Jessica Herd, Johnathan Herd; and his adored great nephew and nieces Julie Jean Spillane, Michael Allen Spillane, and Jolie Herd. As well as a host of other relatives and friends. Visitation will be Tuesday, February 11 from 4-8PM at Edward D. Lynch Funeral Home, Inc, 43-07 Queens Boulevard, Sunnyside, NY. A Prayer Service to Celebrate his life will be held 7:00 pm on Tuesday, February 11. Graveside Service will be held 11:30am on Friday, February 14 at Calvary Cemetery.